Nintendo’s representative in Greece, Nortec Multimedia S.A., Jumbo toy stores, Algida, and the GamePro magazine recently held a Pokémon Event along with Nintendo of Europe of course, offering the Aurora Ticket to Nintendo fans. The main event lasted two days (8 and 9 July) however, sub-events will continue in various cities in Greece. An interesting fact is that more than 10.000 fans had the chance to download the Aurora Ticket into their copies of Pokémon Fire Red and Leaf Green .

Legendary Pokémon’s staff was gathered in the Jumbo toy store in Ekali and covered the event during first day (Friday, 8 July 2005). We arrived there at about 15:00, informed the pretty ladies at the booth that we were able to help with anything they needed and spent the next 5 hours helping people enable the Mystery Gift, get the ticket and solve the puzzle in Birth Island.
The amount of people that came to get the ticket was just amazing: parents and children that heard the news on the TV and even parents alone that wanted to get the ticket in the game they had just bought! We were informed afterwards that about 400 people came in that single store.
Some players, couldn’t get the chance to battle Deoxys right away and we had to explain them that they first needed to find the Ruby plate and then get the Rainbow Pass; some were stuck during the Elite Four and we had to help them get outside and enable the Mystery Gift whilst others had just bought the game and needed help getting it a to stage that the Mystery Gift could be enabled.
The ladies at the booth were doing their best trying to help everyone but they were being overwhelmed by pressing parents and anxious children that wanted to get Deoxys as soon as possible. The Legendary Pokémon squad was there to help again! We mobilized our Wireless Adapters, our GameBoys and our patience to assist anyone that needed our help. There were times that we were playing with a GBA on each hand and talking to another 2-3 people simultaneously. Sometimes we had to repeat the same things over and over again while trying to get something to drink in order to rest our vocal cords, not to mention that our brain got stuck from the amount of the answers we had to answer and there were moments that we could think nothing.
Here’s one of the typical dialogues we had (translated):

(while trying to unlock the Mystery Event in Player1’s game)
Arty2: What was I doing now? Oh right, go to the second floor of a Pokémon Center.
Player2: Okay… which one?
Arty2: Anyone, and you go inside a store and tell me when you’re there.
Mom of Player3: Listen to the mister, will you?
Player3: Right mom… erhm that store? (shows the Jumbo toy store).
Arty2: No, not that one, the one in the game where you buy Pokeballs!
Player3: Which one?
Arty2: Anyone!

Seriously though, I hate being called mister, I am not that old… but anyway, we also had some fun ourselves too, we got to Mix Records, make some level 150 Gold Pokéblocks, have 2 VS 2 battles and finally WhiteYoshi gave us Eon Tickets, Pichus with Volt Tackle, E-card berries and trainers.

Many thanks to Eraleas who traded a lot of Pokémon with rare berries. Pokérus and rare egg moves advertising the site (under all that pressure he didn’t even get a chance to grab one of the Algida ice-creams that the event people were giving away) and my friend Dinos (for being on my side and helping a lot of fans capturing Deoxys) and also to WhiteYoshi and Blue from Nintendo forums, our new staff members! 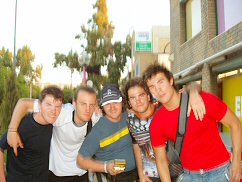 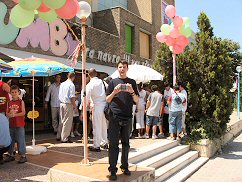 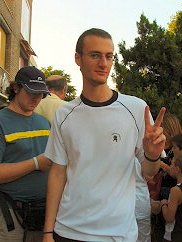 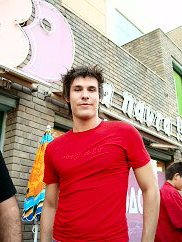 Arty2 (notice the logo on the T-shirt) and Eraleas. 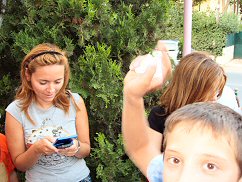 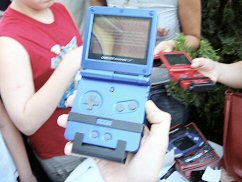 Photos from the event… 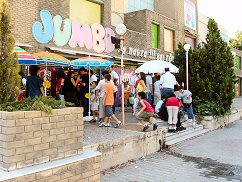 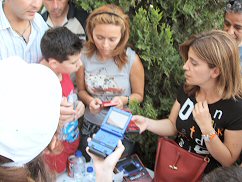 …and more photos from the event. 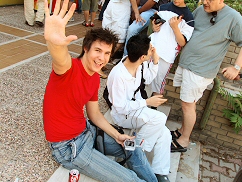 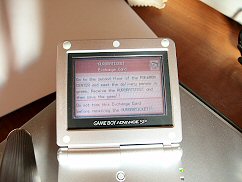 Eraleas trading with WhiteYoshi and the Aurora Ticket exchange card