Dinosaurs and other extraordinary prehistoric Pokémon have always been fascinating due to their mysterious nature. People are often amazed with the diverse and unusual appearance since most of them have nothing in common with today’s dominant mammals and their scarce look-alikes are not widely known. The most famous prehistoric creatures are dinosaurs which along with other reptile-like creatures like the flying pterosaurs and the aquatic “sea monsters”ichthyosaurs, plesiosaurs and mosasaurs ruled the earth for millions of years while the inferior mammals, which evolved from the monstrous pelycosaurs, lived in their shadows.

The extinct dinosaurs (or at least the ones that didn’t evolve to birds) shared their fates with many other remarkable creatures such as various arthropods or cephalopods. Our only source of information about these creatures are their fossilized remains, however a few animals from the ancient eras of life, some of which even predate the dinosaurs and of course man, have managed to survive up to this date. Those are called living fossils and may include animals such as common as a cockroach or a dragonfly.

There’s no doubt that Satoshi Tajiri would be inspired by this wide variety of unusual animal forms when creating Pokémon. This shall be the first in a mini-series of articles concerning prehistoric Pokémon among the different generations. We’re not going to determine the origin of dragon-like Pokémon such as Charizard or Dragonair but rather analyze only the truth behind Pokémon recognized by the games’ plot as fossils.

Prehistoric Pokémon were introduced in the first Generation. Using a process similar to that of the movie film Jurassic Park: scientists of the Cinnabar Island Laboratory were able to extract DNA out of fossils or amber (fossilized resin) and recreate via the process of cloning Omanyte (Helix Fossil), Kabuto (Dome Fossil) and Aerodactyl (Old Amber). Apparently due to their fossilized nature, one of the two types of all prehistoric Pokémon is ROCK.

Omanyte (オムナイト/Omunaito)’s name is combination of ammonite an extinct cephalopod, and “omu”, the Japanese word for nautilus, a living fossil. Same applies for Omastar (オムスター/Omusutā) which also includes the word “star”probably because it’s major tentacles have the shape of a starfish.

The concept of the above Pokémon is centered on the foresaid cephalopod, ammonite. Ammonites have no living close relatives as their order became extinct at the close of the Cretaceous (65 m.y.a.) along with the dinosaurs, however they have a lot in common with another animal in the Cephalopoda class, Nautilus. Their shape resembles a ram horn, and Pilnius the Elder (a roman philosopher, naval and military commander) called their fossils ammonis cornua (horns of Ammon) because of the egyptian god Ammon, god of wind and weilder of the “breath of life”, who was depicted wearing ram’s horns. Omanyte’s height is 0.4m / 1’04″ which is about the average for a Jurassic period ammonite while Omastar is double its size at 1m / 3’03” which is comparable to the Titanites from southern England. Certain specimens of ammonite fossils reach 2 metres (6.5 feet) in diameter.

Pokémon Gold’s entry reads: “Apparently, it cracked SHELLDER’s shell with its sharp fangs and sucked out the insides.”and actually ammonites probably did feed on fishes, crustaceans and small sea creatures. Emerald’s entry reads: “An OMASTAR uses its tentacles to capture its prey. It is believed to have become extinct because its shell grew too large, making its movements slow and ponderous.”and while most ammonites used to be good swimmers, much like Nautiluses, some ammonoids are though to have been slow-swimming bottom-dwellers, so it is probable that Omastar became extinct due to lack of prey in its hunting area. The extinction of ammonites is hard to be explained and no one has ever found a living fossil up to this date.

The prototype name for Omanyte in the beta version of Pokémon Red and Green was “Ess” while Omastar had the name “Kargo” a concept inspired by “escargot” which is french for snail. 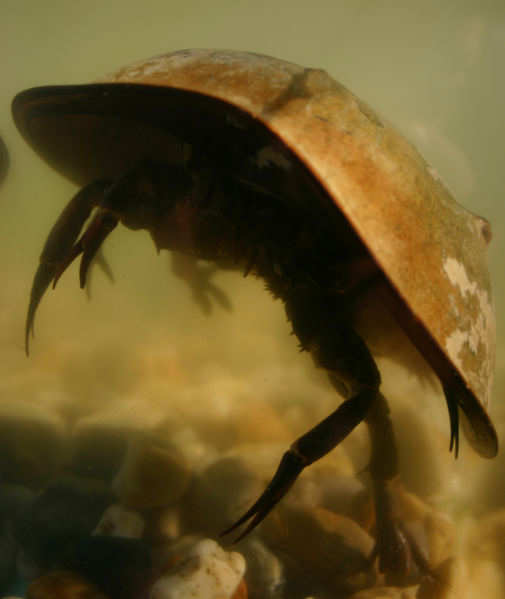 While Omanyte and Omastar are both based on the same animal, Kabuto (カブト/Kabuto) and Kabutops (カブトプス/Kabutopusu) have different origins. The name Kabuto derives from Kabuto (兜, 冑) the traditional Japanese helmet as worn by a samurai but also reveals its origin animal since kabutogani (兜蟹) is the Japanese name of the horseshoe crab, another living fossil. Many think that Kabuto is based on a trilobite, however that is not true while it may indeed resemble to some species of the Harpetida order of Trilobites. The Japanese horseshoe crab (Tachypleus tridentatus) is a chelicerate arthropod with a very distinctive shell. Tachypleus tridentatus is the Japanese variant of the most common Limulus polyphemus. They predate dinosaurs by 200 million years and have almost not evolved at all during all these years. They have four compound eyes, and many minor primitive eyes or photo-receptors that react to UV light thus making them a dear subject of researh into the physiology of vision. Kabuto however appears to only have four eyes; two big red ventral eyes (they also appear on the real life horseshoe crab in a lesser form) and two “glowing eyes” on its back according to its Crystal entry. Kabuto measures 0.5m / 1’08″ which is the upper bound for a horseshoe crab. According to the animé, oil extracted from a Kabuto is rumored to have interesting medical properties, longevity being one of them. Horseshoe crab’s famours blue blood is also extracted commercially for medical purposes such as anti-bacterial tests.

Kabutops on the other hand is losely based on various sea creatures including the horseshoe crab, the triops (tadpole shrimp/shield shrimp), and the eurypterids (sea scorpions). There is an obvious similarity between the shape of its head and the horseshoe crab’s shell or the triops . Triops [from the Greek τρι-(tri) meaning three and όψη (opsi) meaning view] have three eyes, and their appearance hasn’t changed for the past 220 million years. Apparently, Kabutops is also based on the extinct sea scorpions, a large class of arthropods. The sea scorpions were fearsome and formidable predators 460-445 million years ago, and some (such as Megalograptus) species could grow up to 2 metres or more in lenght. Megalograptus also weilded over-developed spiked claws which probably provided initial inspiration for Kabutops’ scythes. Sea scorpions were marine or freshwater predators but they were also alsoable to live on the land for short periods of time and some species are thought to be amphibious.
Kabutops could be also classified as an anthropomorphic Pokémon due to its size and its ability to walk on its hind legs.

Kabuto’s name in the beta versions of the first generation games was “Att” while Kabutops’ name was “Lantis”; both are derived from the word “Atlantis.”

Aerodactyl (プテラ/Ptera) is based on the generic pterodactyl, or otherwise a pterosaur. It’s name is derived from aero- [from Greek αέρο- meaning of air] and dactyl [from Greek δάκτυλο meaning finger]. While some may claim that it is based on Pterodactylus, evidence such as the long tail or the backbone over the shoulders show that is more closely related to species of the Rhamphorhynchoidea.

While pterosaurs dominated the skies for millions of years due to the absence of birds, recent studies have proved that it was some dinosaur species that evolved into birds, and not the pterosaurs. Pterosaurs because extinct by the great extinction that wiped out dinosaurs and many other animals at the end of the Cretaceous period. Their wings were formed by membranes of skin attached to the extremely long fourth finger of each arm and extending along the sides of the body. Aerodactyl could be a medium size pterosaur since its size of 1.8m / 5’11″ and estimated wingspan of 4 metres, is nothing to be compared with Quetzalcoatlus’ 12 metre wingspan; surprisingly Aerodactyl weighs 59.0kg, 10kg more than the average Quetzalcoatlus!

Aerodactyl is one of the fastest Pokémon beside the fact that it is of ROCK type.

I may not be such a good write as whiteyoshi but I was really passionate about Paleontology during my teens and I wish you enjoy the results of my research in my very first Pokémon Origins article. Here follow some of links that proved useful during my research.