Perhaps some of you might be wondering why so many creatures have not survived to our days; its something I neglected to mention in the first article of the series. There are certain events in Earth’s life that are called Mass Extinctions. These are marked by major catastrophs caused by volcanic activity, asteroid impacts, variations of global temperature etc. There have been at least five major Extinction events that repeatedly wiped out up to 96% of earth’s species and eventually cleared the way for mammals’ domination.

While the second Generation had no fossils at all, the third “advanced” Generation packs three very interesting Pokémon based on some extremely old creatures. They could be brought back to life from Devon Corp.’s laboratories in Rustboro City using DNA samples from a Claw Fossil (Anorith) or a Root Fossil (Lileep).

Relicanth (ジーランス/Jīransu) unlike other fossil Pokémon, is not revived from a fossil but it can be found in the wild instead. However it is still considered a fossil Pokémon due to its type (Water/Rock) and its origin. Relicanth’s name comes from relic and coelacanth. Coelacanth [’hollow spine’ from Greek κοίλος (coelos) meaning hollow and άκανθος (acanthos) meaning thorn/fishbone] is the name for an order of ancient fish which were thought to be extinct (due to lack of fossil records) until recently, they’re therefore living fossils. A weird fact about their name is that κοίλος (coelos) is pronounced “kilos” therefore coelacanth’s pronounciation “see-lah-kanth” is wrong. They appeared 370 million years and have barely changed since then.

There are two species of coelacanth: Latimeria chalumnae which has a deep blue colour and lived in the west Indian Ocean and the brown-tinted Latimeria menadoensis which lives in Indonesia. They are lobe-finned fish and their fins are supported by small bone structures which led many scientists in the past to belive that they were the missing links between marine and land animals which is false since coelacanth is the sole survivor of a line of extinct animals. They also have bone like scales (which explains why Relicanth is described to have tough scales that are like craggy rocks) and a special electrical field sensor called a rostral organ which they use to detect their prey especially in low-light conditions. Coelacanths usually live in great depths (as deep as 700m/2296.5ft) since their eyes are very sensitive to light are are very rarely caught by fishermen and that’s one of the reasons they were thought to be extinct. It seems that local fishermen would throw them back in the water if caught by accident because they are inedible as their bodies are rich in a laxative oil. They can grow up to 2m/6.5ft and their average weight is 80kg/176 pounds. Female coelacanths keep their eggs inside them and thefore give birth to live young, in clutches numbering between five and twenty-six!

There is also a Digimon called Coelamon that is based on Coelacanth.

Anorith (アノプス/Anopusu) is considered to be a kind of Pokémon predecessor, which is pretty logical considering it is based on Anomalocaris, an extinct carnivorous marine animal that lived in the Cambrian period, 530 million years ago. It is probable that the -ith in its name comes from the Greek word λίθος (lithos) meaning stone. The Anomalocarids were agile predators of a remarkable size that few other Cambrian animals could match; some specimens grew up to 2 metres. Anorith would be a medium size Anomalocarid with a lenght of 0.7m / 2’04″.

The photo of an Anomalocaris model that appears on the right was found on a japanese website about prehistoric animals and is the only one that has a matching colour scheme with Anorith; it seems probable that Satoshi Tajiri and Ken Sugimori were inspired by this very model.

Their appearence and the way the moved would be unfamiliar to us since they have no similarities to any living creature. In front of their mouth they had two shrimp-like appendages which have apparently been replaced by “extendable” claws in Anorith’s case. Their flat, segmented body was equipped with a series of swimming loves. Anomalocaris would undulate these flaps and therefore simulate a wave-like motion, probably similar to the way rays do.

Anomalocaris were often missidentified by paleontologists. The name Anomalocaris (unusual shrimp) itself originally referred to the detached arms or a fossilized specimen; it’s mouth was mistaken for a jellyfish and its body was thought to be a sponge.

Armaldo (アーマルド/Āmarudo) on the other hand is freely based on Anomalocaris with apparently, an inheritance of elements by dinosaurs like the Stegosaurus or Ankylosaurus however its name comes from armor or possibly armadillo. It has a hight of 1.5m / 4’11″ which is essentialy the same with the player’s height in the videogames. It’s supposed to live on land and walk on its hind legs and is probably one the first Pokémon that chose leave the sea behind. It is protected by an extremely tough shell and is armoured with two “enormous” extendable claws that “have the power to punch right through a steel slab”.

Lileep (リリーラ/Rirīra) is based on another family of ancient marine animals, called crinoids which are also called “sea lilies” since they are often mistaken for plants. Its name originates from lily and peep because it looks like it’s peeping out of its stem. Crinoids date back to the Ordovician period (~450 million years ago) however very few species have survived into our days; sea urchins are distant cousins of theirs. They are characterized by a mouth on the top surface that is surrounded by feeding arms and a stem which they use to attach themselves to the seafloor although most modern crinoids are free-swiming and lack that stem. They used to feed on food particles that they collected from the currents flowing past them. Some crinoids were over a meter long which is is close to the size of Lileep and Cradily however didn’t look as massive and resembled thick algae.

Cradily (ユレイドル/Yureidoru) is also based on crinoids with hints from the Piranha Plants from Super Mario’s universe or the Deku Babas from the Legend Of Zelda series. Unfortunately there little to be said about crinoids, since they obviously live a rather boring life. 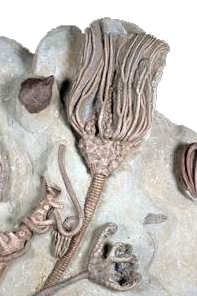 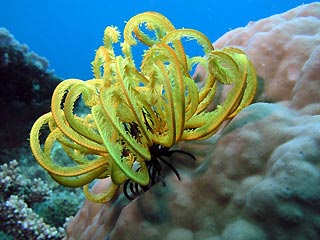 There are no Digimon based on Crinoids? (That’s how boring they are…)

Here are some of the sources used in the making of this article which can provide you with more detailed information if you are interested.