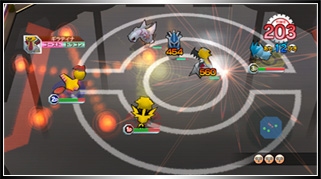 It’s been announced from the official Poké site, that a new game, going by the name “Melee! Pokémon Scramble” will be released on June 16, available for the Japanese Wii-players. It’s download cost will be 1500 points.

The game can be controlled with the Wii remote held sideways, or the Nunchunk. Pokemon will look like they did on “Everyone’s Pokémon Ranch”. Players must control their Pokémon in a pit, which is filled with many other Pokémon. The winner is tha last one standing. There’s also a story mode, which includes boss fights, a 2player co-op mode ans a stadium mode, where up to 4 players can battle. Players can also trasnfer Pokémon with their Wiimotes, simular to the way Miis are transfered.

Hopefully, we’ll see this one game released for the US and Europe 😉