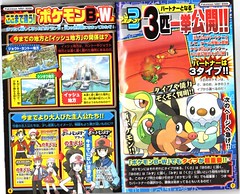 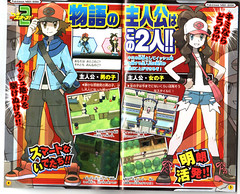 The scans of CoroCoro magazine’s May 15th issue have leaked early as usual, showing not only the starters of the Generation V games, but also the trainers’ artwork! Not much is revealed about the games other than the name of the new region, which appears to be “Isshu“, and the fact that the protagonists are “older than ever before“.

More information posted on the japanese imageboard 2ch include:

Edit on 13/05: All of the above are now confirmed by the CoroCoro scans that appeared today. Check them in our Flickr archive!

The second scan that appeared a few moments ago depicts the two protagonists as well as some screenshots from the upcoming games.

And since we were the first to delve into the Origins of Pokémon, perhaps you’d be interested to know about Uroplatus phantasticus / Opheodrys aestivus the Saddleback Pig and Enhydra lutris!

Thanks to Serebii for the heads-up, forum member Adk for translating the information above and Velisianna for the artwork.