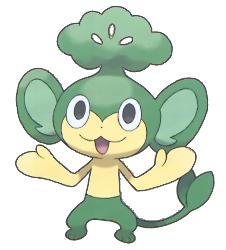 Pokémon Sunday just finished airing moments ago and they revealed the Pokémon with the broccoli-like head. Its name is Yanappu [ヤナップ], it’s the Grass Monkey Pokémon and it stands 0.6m tall and weighs 10.5kg. It is a Grass-type, its ability is Gluttony and it learns a new attack named Acrobat [アクロバット], which can hit opponents out of its range in triple battles. Its power also doubles if the user has no held item. We didn’t get as much new information as we believed, but still, it’s a new Pokémon.