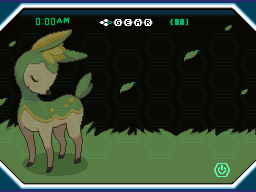 The second of the four seasonal Deerling C-Gear skins has become available internationally via the Pokémon Global Link. The skin will be up for download starting today until November 9th. As usual, a password is needed and it will soon be revealed in the official site. We will update this post once we know the password.

Update: The password has been revealed! Enter PB52XQ2H in the Promotions page of the PGL to receive the Deerling skin.

What’s definitely more important than a C-Gear skin though is the first ever Wi-Fi Pokémon tournament! It’s called “The 2011 Autumn Friendly Tournament“, and it uses the Battle Box mechanic in Black and White. Registrations run from October 12th to October 19th and there’s a limit of 10,000 participants. The rules are pretty much the same as the 2011 VGC ones, the tournament will involve Double Battles, each player can register 6 Pokémon from the Unova Pokédex only with the exceptions of Victini, Reshiram, Zekrom and Kyurem and Pokémon with a level of 51 or above will have their level reduced to 50 during the battles. Here follows the official announcement:

Looking for a way to tune up your battling skills? Try a Wi-Fi Battle Competition! The 2011 Autumn Friendly Tournament is an easy way to play against other Trainers around the world. This competition is part of the Global Battle Union, one of the awesome features of the Pokémon Global Link. The tournament is completely free, so don’t miss your chance to show off your Trainer talent!

During the tournament, you’ll play against other Trainers online, using your Nintendo DS system and your Pokémon Black Version or Pokémon White Version game. The better you do, the higher you’ll rank. Then, at the end of the tournament, all the results will be posted to the leaderboards on the Global Battle Union website!

Here are some things you should know when preparing for the 2011 Autumn Friendly Tournament: All battles are Double Battles, meaning two Pokémon from each Trainer’s party will be battling at the same time. You need at least four Pokémon in your Battle Box before each battle, and you can have up to six. All of the Pokémon must be from the Unova Pokédex. Victini, Reshiram, Zekrom, and Kyurem cannot be used. When you battle, any Pokémon at Level 51 or higher will automatically become Level 50 for the duration of the battle. Pokémon at Level 49 or lower will not change level.

Registration for the 2011 Autumn Friendly Tournament will be October 12th to 19th via the Global Battle Union. Battles begin October 20th and run through the 24th. Be sure to register early—only the first 10,000 people will be given a place in tournament! To register, you need a Pokémon Trainer Club account and the ability to log in to the Pokémon Global Link. To battle, you need to have access to a wireless Internet connection.

Good luck and have fun in the Global Battle Union 2011 Autumn Friendly Tournament!

On a side note, the japanese release date of PokéPark 2: Beyond the World has been revealed through a commercial. The game is due for release in Japan on November 12th, 2011.