This retrospection aims to draw some conclusions from the first Greek Pokémon Championship, which run via Nintendo Wi-Fi connection from April 21st to July 16th, organized by Nintendo.gr with Legendary Pokémon’s support and co-operation.

The tournament had 62 participants, of which 10 failed to show up in either the first or the second round. Estimated age range was 10 to 24 years old – the author was familiar with most of the participants through the Nintendo.gr forums. Only two girls were among the total. The tournament format was single elimination which resulted in 6 rounds of battles.

Our sample consists of 58 teams, made up of 6 Pokémon each, 41 of them complete with movesets of which 7 had no items attached, apparently consciously; a few only had a couple of items. There were at least 9 shiny Pokémon participating in the tournaments, as participants voluntarily declared.

The above sample is not sizable enough to draw any conclusions about a possible distinct metagame in Greece, it is however indicative as to what proportion of the participants can be described as knowledgeable about competitive battling or casual. The statistic data we gathered also allows us to spot some trends among usage of Pokémon, attacks and items.

Before moving further, a quick review of the tournament rules as designated by the Legendary Pokémon crew:

Players had to agree on a date for their match during a flexible (alas…) time period and publicly disclose their arrangement on the Nintendo.gr forums.

If either player happened to disconnect during a match (up to two times) then a rematch was in order. Cases of multiple disconnections were to be examined individually.

After a particular match was over, the participants had to send a report describing the opponent’s team and could also request a hack check if they doubted the legitimacy of their opponent’s Pokémon.

Participants that revealed an opponent’s Pokémon publicly were to be eliminated. A hack check included inspection of Pokémon’s statistics and related available information via Wi-Fi or photographs

Comments on the Rules

As expected the rules caused some stir among the participants, some complained about most legendaries (ubers) being prohibited, mostly casual players apparently yet even more had complains about forcing set solid teams. The latter dispute was quite easy to settle since that’s the norm in all official tournaments though. Perhaps in the next tournament we could open up a 7th or 8th slot though prohibit use of additional Pokémon during rematches.

What proved to be problematic was not having strict time limits on each round’s duration, thus the tournament was slow paced and lasted 3 months. That will be a thing to remember when organizing similar events in the future.

Multiple disconnections was another issue that caused frustration to the judges. Due to the nature of a Wi-Fi tournament, a lot of connectivity problems are bound to appear. What is more, it’s tough to accurately determine whose fault it is. Through endless email back-and-forths, we ended up requesting that the players capture video of their battle to see who was the first to disconnect. Preferably, we asked the participants in dispute to peacefully decide -if possible- on which had the advantage and should therefore move forward. A fair and objective solution to this problem is yet to be found.

Wi-Fi tournaments require less to none resources since there’s no need for conference halls or people to set things up and moderate the event. It is also more convenient for players in remote locations to participate. There are however serious shortcomings: dealing with disconnects is problematic, legality checks are harder plus it’s also a fact that such tournaments no matter how flexible they are, should eventually finish in a timely manner, hence why double-battles or all-play-all formats are not suitable.

Last but not least, a mistake we should never repeat was not having a strictly formated team submission template. This not only brought a chain of emails that could be avoided, but also made the data procession that precedes this very article slow and tedious.

Since our sample was relatively small, the author believes that bar charts and percentages are unsuitable for the purpose of this article, thus word frequency clouds are used instead.

In the following cloud, you can clearly see which species were the most popular among the participants. The results are rather predictable considering the Soul Dew clause and the fact that Tyranitar and an itemless Garchomp could not co-exist. The usual suspects are also among the top ten, along with mostly fire-type starters, which are traditionally popular.

If you’re willing to participate in the next championship, which is going to be sometime around Christmas, I hope you can make good use of these findings. 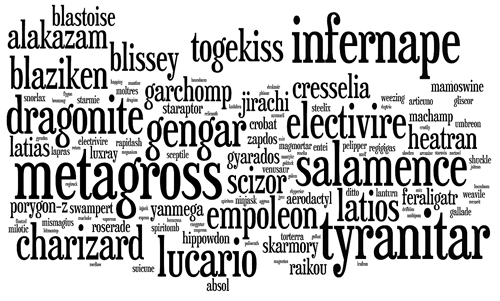 Moving over to the attacks, where Earthquake seems to be overly preferred, followed by Thunderbolt, Icebeam, Psychic, Shadowball, Flamethrower, Hyperbeam and Surf. Obviously predominant species affect which moves are more popular than others. There is however a distinct lack of grass-type moves. 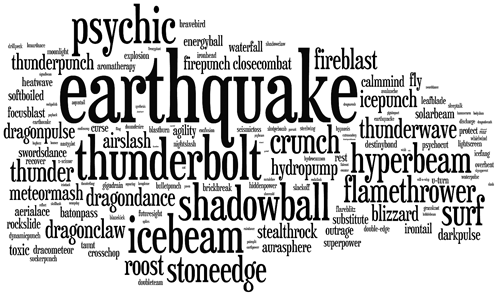 In the following graph are the attacks of preference for Metagross and Tyranitar, the top duo. Movesets vary yet one can spot the trends clearly.

A particular statistic that sets expert players apart from the casual ones is apparently usage of held items. A lot of inexperienced players seem to unknowingly underestimate this feature. Perhaps Pokémon game designers should better underline its potential in the future. Everybody else seems to understand the value of Leftovers however, with Life Orb and Focus Sash following far behind. 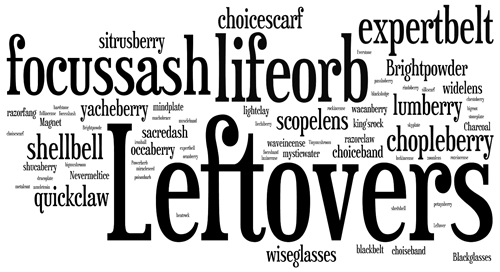 And this is pretty much all we could analyze and visualize from the limited data that was available to us.

Given the opportunity while running the forthcoming tournament, we’ll require more detailed information from the participants, including Level 100 stats and natures. Using a proper team registration template this time around! It will be interesting to see what’s the impact (if any) of this article on team strategies and movesets used during the next championship.

What’s even more important to us than catchy statistics though, is your feedback and suggestions, so let’s hear them!