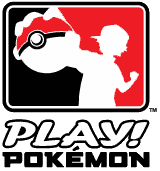 Pokémon Organized Play has been effectively rebranded as Play! Pokémon and the attendants of the 2010 Pokémon World Championships will be the first to see the new brand on a variety of merchandise.

The Play! Pokémon program will organize the Trading Card Game and video game events and tournaments.

Let’s hope that beyond new nifty logos, this freshened program will also try to revive the TCG in Greece, where the incompetent local distributor promotes YuGiOh! instead, and will also meet the ever growing demand of the videogame fans for a proper championship.

Read the complete press release after the break.

Bellevue, WA-August 4, 2010-The Pokémon™ Company International introduced the Play! Pokémon program today, inviting Pokémon fans worldwide to join the fun at official, year-round Pokémon Trading Card Game (TCG) and video game events. Whether a seasoned player or new to the world of Pokémon, fans will find that the Play! Pokémon program provides events suitable for all levels of Pokémon knowledge. Some players will opt to visit a local Pokémon League, where they can learn about Pokémon games and win prizes, while others may choose to test their strategies and training at competitive tournaments. No matter where Pokémon fans decide to join the fun, players at all levels are sure to have a great time.

“We are thrilled to introduce Play! Pokémon to our loyal fan base as well as to new TCG and video game fans,” said J.C. Smith, director of Consumer Marketing at The Pokémon Company International. “We want to welcome new fans to our Pokémon community, which has seen incredible growth in player participation over the past several years.”

The new name and logos announced today will appear initially on hats, binders, playmats, posters, and other printed materials. Players and fans at the 2010 Pokémon World Championships in Kona, Hawaii, August 14-15 will see the newly branded materials firsthand. For more information about Play! Pokémon, including where to find Play! Pokémon events, players should visit http://www.pokemon.com/us/organized-play/.

The Pokémon Company International, a subsidiary of The Pokémon Company in Japan, manages the property outside of Asia and is responsible for brand management, licensing, marketing, the Pokémon Trading Card Game, the animated TV series, home entertainment, and the official Pokémon website. Pokémon was launched in Japan in 1996 and today is one of the most popular children’s entertainment properties in the world. For more information, visit www.pokemon.com.