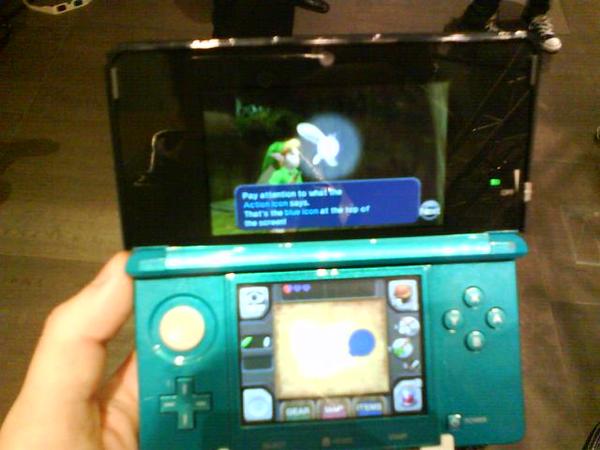 They often say that you’ve got to see in order to believe and that’s exactly the case with the Nintendo 3DS. No matter what you hear or read below, it’s just the kind of experience perceived differently by every single person. I should also warn you that I’m a die-hard Nintendo fan and tech enthusiast, though never really an early adopter. I’ll try not to repeat any details which are already known and only stick to my impressions.

I’ll start with the stereoscopic display since it really is the attention catcher. It works, really. There’s a sweet spot, but it’s comfortably wide. Even if you move slightly outside it, where the graphics come to a slight blur, you don’t get annoyed at all. If you blink either of your eyes you can clearly notice the differences in the images served to each eye. While the top screen is actually larger than the bottom one, you barely notice when you have the device up close.

Depending on the game, you will want to adjust the 3D slider, it’s a must. In Zelda:OoT, Nintendogs(+cats) and Steel Diver you can really appreciate the full depth. In Pilotwings and SSF4 I had to turn the slider midway or I’d get crosseyed. This seems to be quite a matter personal preference though. All the games I tried look great even with the 3D turned completely off; it’s a beast.

The 3D slider seemed to have an analog effect in SSF4 whilst it functioned as a binary switch in the Metal Gear demo video. No frame rate drop was apparent while switching from full 3D to none.
The gyroscope/accelerometers were, beyond my expectations, amazingly responsive and accurate.
Moving the device in a spyglass manner in Zelda:OoT or Steel Diver didn’t break the 3D effect noticeably, but there some differentiations in the brightness of the screen were apparent. These could prove to be quite annoying. I’m unsure whether that was due to the lighting (polarized perhaps?) but will have a second look at it tomorrow, in natural lighting.

Update: Having looked at it for a second time, in daylight now, I should admit that this wasn’t as noticable. The top screen is very reflective, which makes it bad for strong sunlight conditions, but then again, I don’t know of many people who would play it out in the open at noon. I also noticed that with a little effort (perhaps by moving some in-eye muscle) I could now make what seemed as crosseyed 3D into a comfortable experience. Everything just taes practice in life methinks…

Many may think that the 3D is just an eyecandy; but no, it isn’t. I can’t really tell if the graphics pop-out (bad translation methinks) as Miyamoto says, but there’s some depth alright. The black border of the top screen was also a wise choice. The level of immersion the 3D creates was something I didn’t expect. It was like looking into these magic mirror boxes you may have had as a child.

The photo application has a focus and zoom slider combo on the touchscreen. It is quite intuitive though results may vary and it may need some practice getting used to. It is possible to capture cross-eyed photos however. Adding clip-art effects seems to drop the left-eye image and convert the photo to a 2D one, though the clip-art itself was 3D and popped out. There’s an inwards-blurred black border around the photo which makes sense from a technical point of view since not all spots in the viewport can be covered by the two frontal cameras. Photos do retain the 3D effect when viewed in another 3D capable device. I’m now reading that they are stored in the .mpo format which is in turn a JPEG enclosure.

What managed to impress me most were the Augmented Reality features. I only got to try the dragon game, where you place one of the included AR cards on a flat surface and through the 3DS you can see overlayed 3D models which you have to shoot down. Of course the AR card has to be clearly visible on the screen but you can zoom in a lot by coming closer to it. The orientation of the AR card does matter and moving the device around allows you to change your viewpoint. Similarly to a real life situation, when you aim at something, keeping an eye closed really helps and this only adds to the experience.

What’s really interesting is that the device does not only overlay the game’s graphics, but captures a larger planar area around the card and transforms it accordingly. When the dragon monster tried to emerge from below the surface, you could clearly see the desk’s surface stretching in a very life-like manner while you still manipulated your viewpoint by moving around it. It was all unexpectedly responsive and accurate, unlike any other AR applications I’ve seen to date.

The Yu-Gi-Oh! game series and Nintendo’s own Pokémon TCG, beg for this kind of functionality. Curse them if they don’t take advantage of it.

In regards to the hardware now, the console seems sturdy and the plastic casing is of great quality. It gives you the impression that you can drop it without breaking anything off. The beveled edge around top cover makes it very easy to open or shut the lid. Having used the DSi XL for a while now, it seemed to me at the start that it was a little uncomfortable to hold, but got used to it quickly. The circle pad had a great feel to it. It is of a smooth rubbery material which provided additional friction to your thumb and was very comfortable to use. Kid Icarus proves well that the touchscreen doubles as a second analog pad.

What I was most amazed with, was the anti-fingerprint material on the touchscreen; so long annoying fingerprints! The top screen wasn’t that resistive but oily prints could be easily wiped off with some cloth, unlike the DSi. The stylus is sturdy and comfortable to use as well.

It makes me a little sad that the 3DS Shop and browser won’t be available until May but there’s already enough content to keep early adopters busy.

In a somewhat unrelated note, the Wii has sold 230.000 units in Greece while all the Nintendo DS versions combined have topped 458.000 units!

Last but not least, although retailers may change their minds sooner or later, it seems like the Nintendo 3DS will be priced at 270€ in Greece. Sure the taxes are to blame, but still, I think they could do better… In conclusion however, while it is a tad expensive, it still worths its money.

If you want to ask anything in particular, shoot your questions in the comments!

We’d like to thank Nortec S.A. for giving us the chance to attend this press event