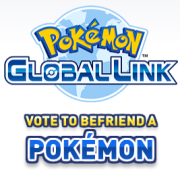 Here’s your opportunity to befriend a Pokémon via the Pokémon Global Link! Following Japan’s similar poll, in which Arceus came out as the winner, the official Pokémon website has started a poll for us non-Japanese people. All you have to do is go here and vote for the Pokémon you would like to receive from the first four generations. The poll will remain open until November 30th and the results will be announced two weeks after that, on December 13th. The most voted Pokémon will then become available on February 1st, 2012.

So, what are you people voting for?