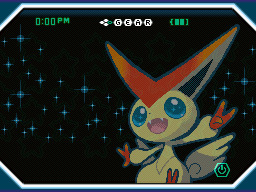 A new C-Gear skin has become available for all players whose location in the PGL is set as a North American country, an Asian country (excluding Japan and South Korea), Australia or New Zealand. The featured Pokémon is Victini this time and the password needed to obtain the skin is pretty simple; VICTINI2011. The skin will remain available until January 12, 2012.

There are currently no news regarding a release for European players.

Update: And apparently, the good news don’t stop at just a C-Gear skin. In order to celebrate Victini’s role in the upcoming Pokémon movies (“Pokémon the Movie: Black – Victini and Reshiram” and “Pokémon the Movie: White – Victini and Zekrom“), Pokémon.com has announced that Victini will be available for download via Wi-Fi! This event-only Victini will have its signature move, V-Create along with the signature moves of Reshiram and Zekrom, Fusion Flare and Fusion Bolt respectively. The Wi-Fi distribution will start on Saturday, December 3rd and will last until Saturday, December 31st. Whether the event will be worldwide or North America-only remains to be seen. The event will run for all regions apart from Japan and Korea.

What’s more, US residents have the opportunity to enter the V for Victini Sweepstakes and win awesome prizes, including a Flame Red 3DS!