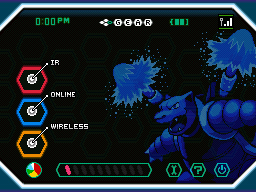 Continuing the 3-month promotion that started in September, those of you with European games will be able to download the Blastoise C-Gear skin from the PGL website starting from today up until March 22nd, 2012. The password required to download this skin is EUPGL112011. As a reminder, the Venusaur and Charizard skins are still available for download until January 19th and February 16th, 2012 respectively and their passwords are EUPGL092011 and EUPGL102011 respectively.

What’s more, IGN has announced a Pokémon distribution through the PGL. The Pokémon given out is Croagunk and it comes with its Hidden Ability; Poison Touch. The distribution is currently active in North America and Australia and the password needed to receive Croagunk is IGNRuggedMountain. Along with the Croagunk distribution, the article also reveals some of the Pokémon that will be available in the new Dream World area, Rugged Mountain. They include Skorupi, Spinda, Torkoal and Rhyhorn as well as various other Ground-, Fire- and Fighting-type Pokémon. The Rugged Mountain area will go live on Wednesday, November 16th.

In other news, a new Wi-Fi tournament has been announced in the Japanese Global Link website. Registrations for the tournament, called “Famitsu Cup”, start on December 1st up to December 6th and the tournament itself runs from December 7th till December 23rd. This time, the tournament will involve Single battles. If you have a Japanese Black/White version, consider participating!