Yesterday, the japanese variety show Oha Suta aired the first teaser trailer of the upcoming Pokémon movie. The 30-second clip shows the Musketeer trio, Cobalion, Virizion and Terrakion as well as Kyurem and also revealed the title of the movie, “Kyurem VS the Sacred Swordsmen” [キュレムVS聖剣士]. Although it’s not confirmed yet, we can assume that the Sacred Swordsman is probably going to be Keldeo as the common pattern in the previous years is that unreleased Pokémon are first revealed in the movies. 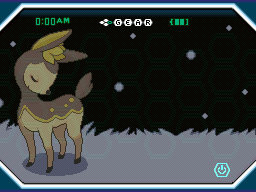 In other news, the fourth (and last) seasonal Deerling C-Gear skin has become available internationally via the Pokémon Global Link, concluding the 4-month promotion that started in September. The password needed in order to receive the skin is not known yet but it won’t be long till it’s revealed. The skin will be up for download starting today until January 11th, so get it while you can!