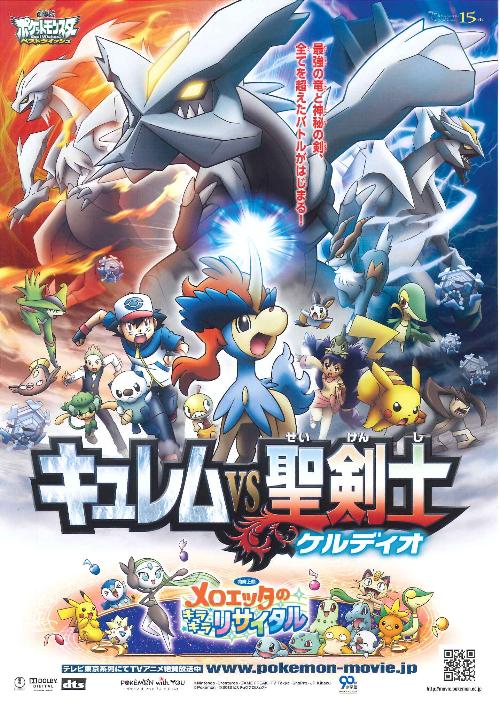 Pokémon Smash has already started and they have already admitted they will announce a new game later during the show! However the big news didn’t come from Pokémon Smash. One of the japanese websites that post information of the new movies has updated with a poster for the 15th movie, and it clearly shows two new Kyurem formes Legendary Pokémon. The two Pokémon look like a combination of Kyurem and either Reshiram or Zekrom. Also, in the bottom of the poster, Meloetta will also get a short movie named “Meloetta’s Bright Recital” [メロエッタのキラキラリサイタル]. All this info is not 100% confirmed so take it with a grain of salt. We will update with more news about the new game when Pokémon Smash ends!

Update: Junichi Masuda has just tweeted that the announcement is coming soon!

Update: The new games are here! Junichi Masuda just announced Pokémon Black 2 and Pokémon White 2! The games will be released in June 2012 in Japan and they will be for the Nintendo DS.

Update: The japanese official website for Pokémon Black/White 2 is up and running already, check it here. If that is the actual box art, it is glorious!

Update: In a somewhat unusual move, the english official Pokémon website has been updated with the news about Pokémon Black/White 2. This is just a guess, a prediction if you want, but that could be the first sign of a simultaneous worldwide release for the first time!

Update: According to Junichi Masuda, Kyurem’s new formes the new Legendary Pokémon are named “Black Kyurem” and “White Kyurem“. His tweet calls them “new legendary Pokémon” so we cannot be sure whether they are Kyurem’s formes or not!

So, now that the influx of news has died down, tell us what you think! What’s your opinion on Pokémon Black/White 2? You can post on the comment section below or, better yet, visit our forum thread here.