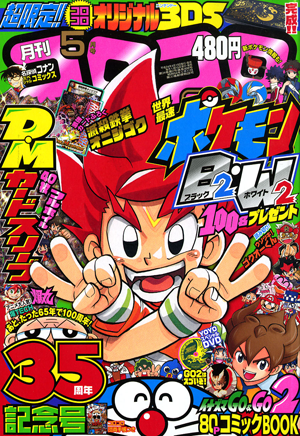 The cover of the May 2012 issue of CoroCoro has been leaked early as usual and it reveals Meloetta’s Pirouette Forme (top right corner). The phrase above Meloetta can be translated to “a new Pokémon appears” [新ポケモン登場], most likely referring to Meloetta’s forme, instead of a completely new Pokémon.

Also, the characters next to Meloetta are rumored to be related to Pokémon B2/W2, possibly the new protagonists? This is not confirmed though and we’ll have to wait for more scans to be revealed before knowing for sure. Once more information becomes available, this post will be updated so check back often!

Update: Pictures of the magazine are now out and they bring us some new exciting information, so let’s see them! 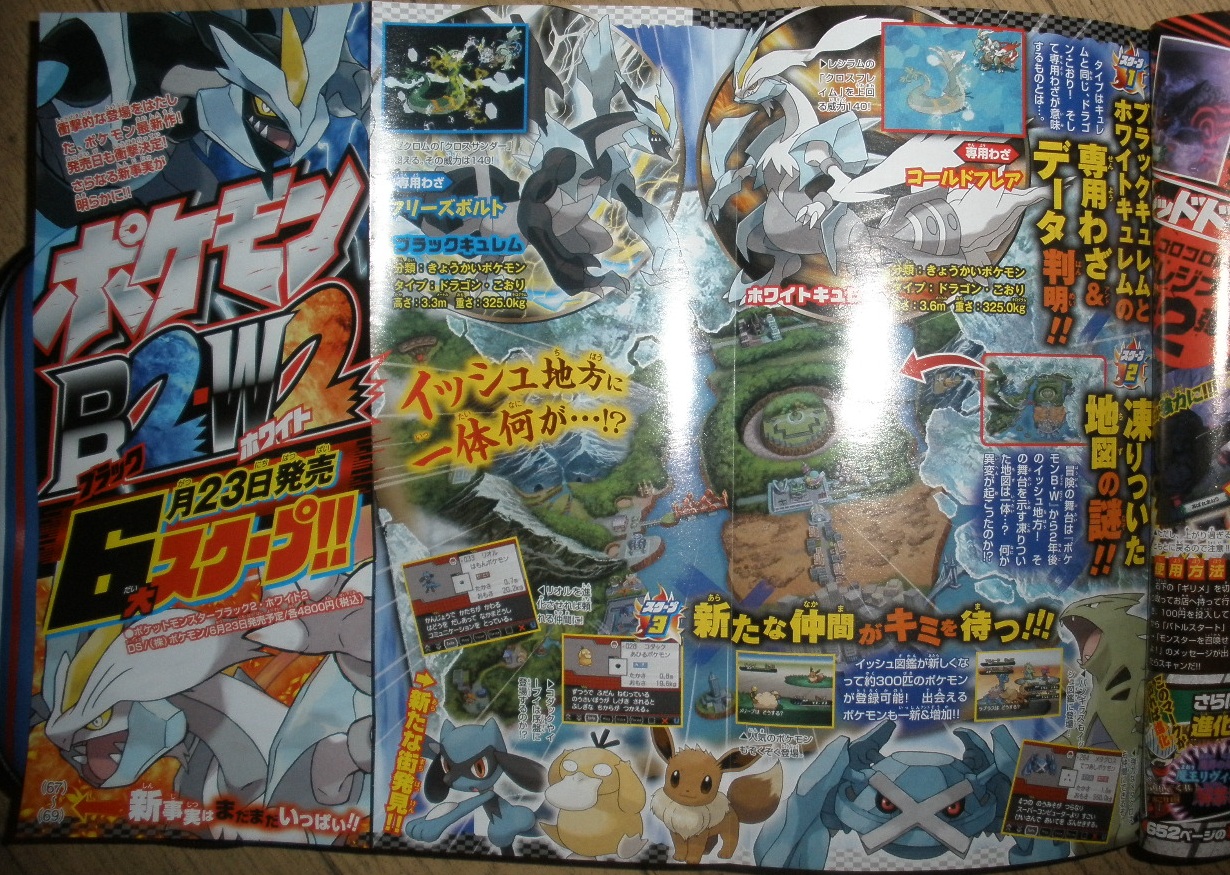 The first image confirms that the games are sequels of B/W and will once again be set in Unova, two years after the events of B/W. There are many changes in the Unova region though. A big part of the region is covered by ice and some entrances to caves made of ice are visible. What’s more, two new town have been added to the south-west of Unova. The scan confirms that Freeze Shock and Ice Burn are the signature moves of Black Kyurem and White Kyurem respectively. It is also revealed that apart from Gen V Pokémon, 300 older ones will be available throughout the game, including Psyduck, Arcanine, Lapras, Eevee, Mareep, Tyranitar, Metagross, Riolu and Weavile. Finally, the rumored release date in Japan has been confirmed, the games will be out on June 23rd, 2012. 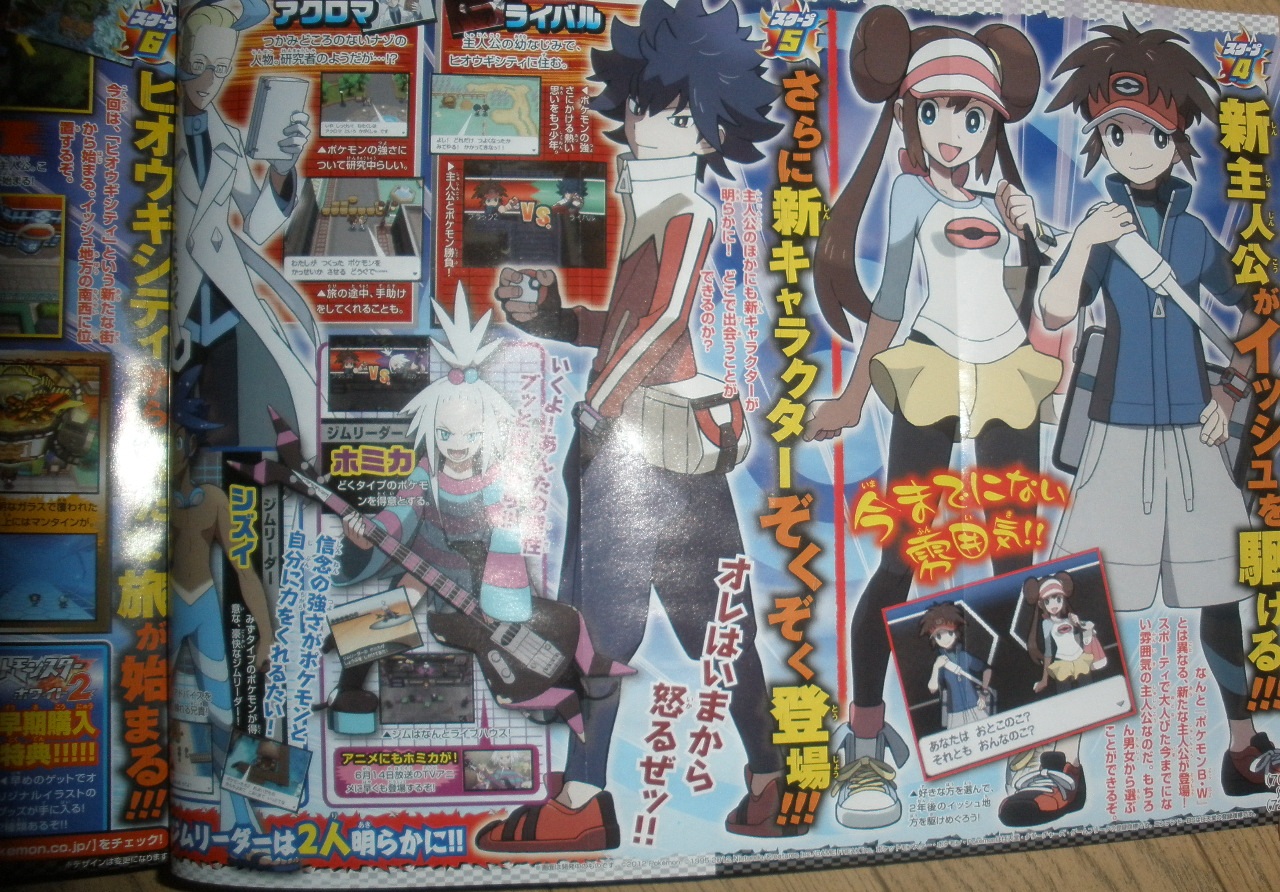 The second image contains information about the playable characters, the rival and some new Gym Leaders. In the right, you can see the male and female playable characters while the boy in red is the new rival, once again a childhood friend of the player. Next to him, the girl with the guitar is Homika, the new Poison-type Gym Leader. The tanned guy in swimsuit and goggles is Shizui, the new Water-type Gym Leader. Akuroma, the man in the lab coat, is a “mysterious person” researching Pokémon strength. 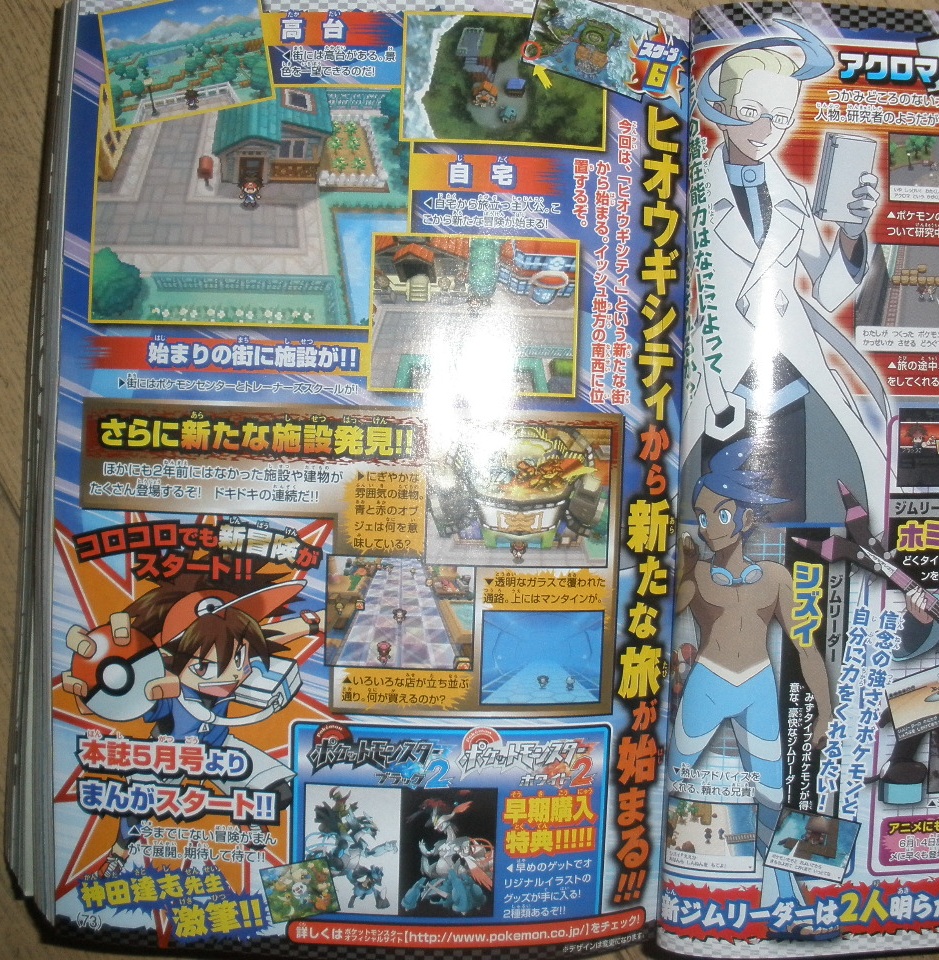 The final image shows the starting city of the game. Contrary to B/W, you don’t start at Nuvema Town but in Hiougi City, located in the south-west part of Unova. The city has a Pokémon Center, a Trainers’ School and a lookout, this is probably the biggest starting city we’ve ever seen. Other than that, the scans shows some new places, buildings and facilities such as that underwater tunnel.

So, with that much revealed, speculation about the upcoming games can only become more interesting. Be sure to drop by our B2/W2 thread in the forums and tell us your thoughts!