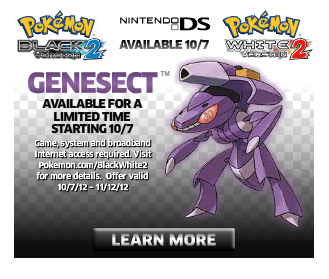 As seen in an ad on GameSpot, a Wi-Fi distribution of Genesect has been announced for North American Black 2 and White 2 games. The distribution will start on October 7th, the release date of B2/W2 in North America and will last till November 12th. Like its Japanese counterpart, it will most likely come with the moves Techno Blast, Magnet Bomb, SolarBeam and Signal Beam.

So Genesect seems like the equivalent of Victini in B2/W2, an event Pokémon distributed right after the game’s release as an incentive to buy the game early. Nice move by Nintendo!

Update: The event has been confirmed for European games as well, starting on October 12th, the release date of B2/W2 in Europe.

Update: Australia gets Genesect too, starting on October 11th. So every region will get Genesect on the release date of the games in that particular region.